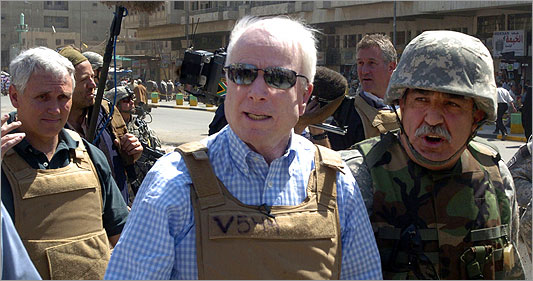 Okay, in the news today is McCain's challenge to Obama to visit Iraq because he is "ignorant of the facts on the ground" in the war zone--unlike McCain himself, who famously toured a Baghdad market in April 2007 and subsequently pronounced on how much improvement he had personally witnessed in the security situation. As many commentators pointed out at the time, the perimeter of McCain's own security cordon pretty much defined the limits of the improvement he saw that day, which was very short-lived indeed.

In yesterday's post, I complained that the mainstream news media were not providing the kind of context readers needed to interpret news stories such as this. Sure enough, today's account of McCain's challenge in the Los Angeles Times fails entirely to remind readers of the storm over McCain's own misguided factfinding mission, which surely is relevant to the overall story (I hope that Obama's campaign people will remember it and do the media's job for them; at any rate the New York Times also failed to mention this episode in its coverage of the same controversy today.)

I think most Americans realize, or should realize, that touring Baghdad in the company of generals who have their tongues so far up the asses of the members of the chain of command above them--and in this I include General David Petraeus, for whom the choice is either to rim the Commander-in-Chief or resign--is hardly an effective way to determine the "facts on the ground." Readers of this blog will have to excuse the scatological crudity of this particular post, which is the only way I can find to express my outrage about the fecklessness of our military leaders, but is it not remarkable that the world's "greatest superpower" has a military run by the saddest coterie of yes men (and yes women) seen since the European generals who ran World War I? Of course, our generals are only following the sterling example set by General Colin Powell at the United Nations, when he swallowed any lingering integrity he might have had left and made the "case" for the war in Iraq.

As for Obama going to Iraq: By all means he should do it, but I hope he takes along some people who actually know something about the country.

Update: The May 31 New York Times features a profile of retired admiral William Fallon, who was pushed out after his differences with the Bush administration over Iran, Iraq etc. became public.

The candidates speak: (with thanks to reg on Marc Cooper's blog)

Obama, Nov. 2002: “I know that even a successful war against Iraq will require a US occupation of undetermined length, at undetermined cost, with undetermined consequences. I know that an invasion of Iraq without a clear rationale and without strong international support will only fan the flames of the Middle East, and encourage the worst, rather than best, impulses of the Arab world, and strengthen the recruitment arm of al-Qaeda.”

Posted by Michael Balter at 6:52 AM