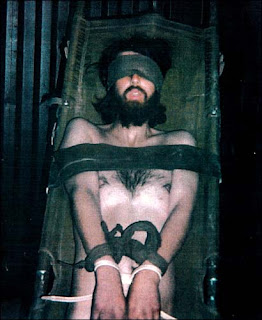 I mentioned in an earlier post that I was reading Jane Mayer's new book "The Dark Side: The Inside Story of How the War on Terror Turned into a War on American Ideals." Reading a book like this, or the many other books written about the Bush administration's crimes and misdemeanors over the past years, is an eerie experience: To those of us who have been paying attention all this time, it sounds very familiar; and yet having the vivid details of what our government has been up to behind the scenes gives the last 7 years since 9/11 a nightmarish quality, almost like a waking dream state. It is all true, and yet how could it be true?

Anyway, Chapter 5 of Mayer's book, "Detainee 001," tells the story of the capture and torture--yes, his treatment was torture under the Geneva Conventions--of John Walker Lindh. I have never read such a detailed account of what the so-called "American Taliban" was put through, even though there was no evidence, and still is no evidence, that he ever intended to commit hostile acts against the United States. For the full details, do read Mayer's book, but a few salient points:

1. Lindh maintained, with no evidence to contradict him, that he had joined the Taliban to fight the Northern Alliance and had no knowledge of plans to attack America.

2. There is no evidence whatsoever that Lindh had anything to do with the death of CIA agent Mike Spann.

3. U.S. officials left a bullet in Lindh's thigh for weeks, claiming that they needed it to "preserve the chain of custody of the evidence against him, " as Mayer characterizes it.

4. Lindh was never told that his parents had hired a lawyer to represent him when he waived his rights not to be questioned, even though he had asked for a lawyer almost immediately after his capture.

5. Before being questioned Lindh was subjected to sleep deprivation, calorie deprivation, and extreme cold while being held in a steel container.

6. Lindh's treatment was approved at the highest level of the U.S. government, which gave the "green light" when some interrogators hesitated and mounted a vindictive campaign to ruin the career of a young Justice Department attorney, Jesselyn Radack, who cautioned that the handling of his prosecution was unethical and illegal (please click on the link to hear from Jesselyn herself, and learn about her book "The Canary in the Coalmine.")

7. Lindh was convicted in the end of only one of the 10 original charges against him, and that charge had nothing to do with terrorism against the United States.

Lindh's lawyers, and his parents, have asked President Bush to commute his 20 year sentence, and that request has been supported by many others, including newspaper editorialists. Lindh's treatment and subsequent conviction and imprisonment were one of the first steps in the Bush administration's systematic attempts to throw away the Constitution in its "war on terror." Barack Obama has spoken out against Bush and co's unconstitutional acts. The conviction and imprisonment of Lindh, at worst a misguided young man who was in the wrong place at the wrong time, is unsafe and unsound. If Obama is elected, let one of his first acts be to remove this stain on the American Constitution and on American values, at least as we profess them to be.

Some sense about U.S. policy towards Russia: From New York University Russia expert Stephen Cohen, writing in The Nation online.

Scumbag Department: The Los Angeles Times' Tim Rutten takes apart right-wing racist dirtbag Jerome Corsi's bestselling book "The Obama Nation," but then focuses attention on the mainstream publishers that are profiting from this kind of scurrilous and dishonest "literature." I am ashamed to say that the publisher of Corsi's book, Threshold Editions, is owned by Simon & Schuster, also owner of the Free Press which published my own book "The Goddess and the Bull." Anything to make a buck, even if it stokes up the absolute worst in America and Americans.

Department of Willful Stupidity: The Veteran's Administration doesn't want to help disabled vets register to vote. I wonder why?
Posted by Michael Balter at 6:59 AM

Lindh was an idiot for getting mixed up with the

Sorry about that. My computer did something funny. Anyway, as I said, Lind was an idiot for getting mixed up with the Taliban. But also as I said, idiocy is not a cricminal offense. Yeah. He should be freed. But what might happen after that, in the US, I don't know.
Anne G