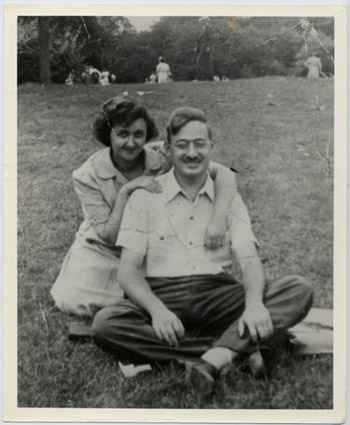 The Rosenbergs' two sons released a statement today in the wake of recent news stories about their parents, accused "atomic spies" Julius and Ethel. Please give it a read (with thanks to PG for bringing this to my attention):

On September 11th, the transcript covering testimony of 43 of the 46* witnesses who appeared in front of the Grand Jury investigating our parents in 1950-1951 was made public. (*Only a portion of the testimony of Harry Gold, a key prosecution witness, was made available, and legal efforts to date have failed to win the release of testimony of three other witnesses, including Ethel Rosenberg’s brother, David Greenglass, the most crucial witness in the case.)

This historic release of information coincided with an article that appeared on the same date in The New York Times interviewing Morton Sobell, our parents’ co-defendant. Ever since his arrest more than 50 years ago, Morton had maintained his innocence. But in last week’s interview he stated that he and Julius Rosenberg passed non-atomic military intelligence to the Soviets during World War II in an effort to help them defeat the Nazis. Morton has since written a letter to The New York Times clarifying the extent of his personal knowledge of our father’s activities.

We have received many inquiries seeking our reactions to these revelations. Now that we have read all 930 pages of Grand Jury testimony that have been released, and have had an opportunity to integrate this new information with the rest of the historical record, we are sharing the following reactions.

1) In 1975, we made our initial Freedom of Information Act request to the U.S. Government for all the materials in its possession pertaining to the investigation, arrests and executions of our parents, as well as all material related to Morton Sobell. In our press release announcing that FOIA request we stated, “The truth is more important than our personal political position.” We meant it. Though we believed then that this material would prove our parents’ and Morton’s innocence, we have always been willing to accept whatever the record showed.

2) Since the 1980’s we have maintained that it is possible that our father engaged in non-atomic espionage, but that there is no credible evidence that he participated in ANY activities that resulted in him obtaining or passing the “secret of the Atomic Bomb” to the Soviets. Morton’s statement, buttressed by his letter published in The New York Times on September 19th, 2008, moves us to acknowledge that Julius did, in fact, participate with others in passing along military information. But at the same time, we believe the still-evolving record makes it even clearer that Julius did not “steal” or transmit the “secret of the Atomic Bomb,” the crime for which he was executed.

3) The newly-released Grand Jury testimony provides several bombshells, three of which we outline below.

Confronted with Ruth’s revised statement, David then contradicted his earlier statement to the FBI in which he had denied our mother’s participation in any espionage activities. This sudden appearance, late in the investigation, of what turned out to be the key testimony against Ethel, is why the future release of David Greenglass’ Grand Jury testimony is crucial. Until that information becomes available, we will be left to wonder: Did David corroborate to the Grand Jury what he first told the FBI (that Ethel was not a participant in espionage activities)? Or did he tell the Grand Jury something about Ethel’s alleged involvement?

Obtaining the full record is essential, because both David and Ruth testified about the typing at the trial. In fact, in his summation to the jury, the prosecutor drove home the case against our mother by referencing Ethel’s alleged typing when he declared, “Just so had she on countless other occasions sat at that typewriter and struck the keys, blow by blow, against her own country in the interests of the Soviets.”

4) All that we have learned in the last two weeks, coupled with all that we have gleaned from the information already available, reinforces the biggest lesson of our parents’ case: The U.S. Government abused its power in truly dangerous ways that are still very relevant today.

Those in power who were involved in our parents’ case:

And finally, the agencies and individuals involved in our parents’ case, systematically and emphatically covered-up and denied all these abuses.