Has the country moved to the left of Obama? 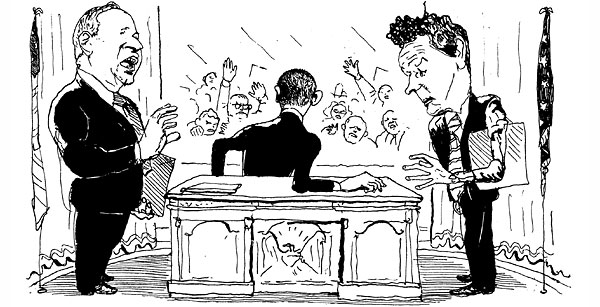 Probably not, and I doubt that I have to prompt many visitors to this blog to read Frank Rich's column, but today's installment makes me wonder if Obama has not at the very least misjudged and underestimated the national mood (ie, the national anger) over the blatant robbery of U.S. taxpayers being carried out by AIG et al. It used to be that such shenanigans were executed behind closed doors; these days, corporate America carries out its corporate crimes right out in the open, in the light of day. That's how arrogant and self-confident they have become, even as the houses of cards they built are falling all around them (and the rest of us.)

And who is in charge of Obama's plan to turn the economy around? Two people right out of the culture that created the crisis in the first place, as Rich points out in his column entitled "Has a 'Katrina Moment' Arrived?":

The “dirty little secret,” Obama told Leno on Thursday, is that “most of the stuff that got us into trouble was perfectly legal.” An even dirtier secret is that a prime mover in keeping that stuff legal was Summers, who helped torpedo the regulation of derivatives while in the Clinton administration. His mentor Robert Rubin, no less, wrote in his 2003 memoir that Summers underestimated how the risk of derivatives might multiply “under extraordinary circumstances.”

Given that Summers worked for a secretive hedge fund, D. E. Shaw, after he was pushed out of Harvard’s presidency at the bubble’s height, you have to wonder how he can now sell the administration’s plan for buying up toxic assets with the help of hedge funds. It will look like another giveaway to his own insiders’ club. As for Geithner, people might take him more seriously if he gave a credible account of why, while at the New York Fed, he and the Goldman alumnus Hank Paulson let Lehman Brothers fail but saved the Goldman-trading ally A.I.G.

When folks on the left began attacking Obama even before he took office for nominating such characters to his cabinet, I and many other defended the president-elect, saying basically that lefties needed to build a movement--ie, put up--or stop criticizing--ie, shut up. Well, the movement seems to have arrived, even if it is mostly spontaneous and not very well organized. Yes, this is the "populist" anger the media is telling us about. That is mediaspeak code for class warfare, and class warfare is a left perspective--like it or not and call it what you will. And yes, Virginia, there are social classes in the United States of America. We need more class warfare, not less, but no worries, it won't split American society down the middle. The rich, after all, are just a small fraction of the population, even if they continue to hold onto power even in an Obama administration. Our new president must be judged on how willing he is to cut them loose (oh, that goes for the health insurance industry parasites too, since opinion polls show that the majority of Americans, including the majority of doctors, favor a single payer plan.)

Trouble in Afghanistan. Once again the U.S. military and Afghan officials disagree about whether a raid killed "militants" or civilians, according to a report in Monday's New York Times. Can anyone recall an episode where the U.S. turned out to be right?
Posted by Michael Balter at 7:27 AM