The Israel lobby in action 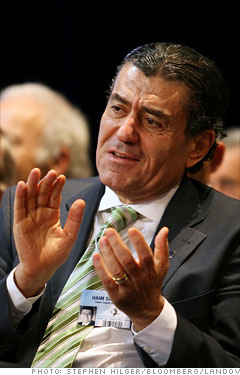 During the first 24 hour news cycle on allegations that Representative Jane Harman of California was trading favors with the Israel lobby over the case of Steven J. Rosen and Keith Weissman--former analysts for the American Israel Public Affairs Committee (AIPAC), aka The Israel Lobby, who were indicted for spying for Israel--the focus has been largely on Harman and the possibility that she engaged in unethical and quite possibly illegal behavior. Assuming that news leaks of wiretaps allegedly catching Harman in the act are accurate, she could be in considerable trouble both politically and legally.

But the episode (again, if reports are accurate) is also very revealing about how the Israel lobby operates. According to the Times report I link to above:

The official with access to the transcripts said someone seeking help for the employees of the American Israel Public Affairs Committee, a prominent pro-Israel lobbying group, was recorded asking Ms. Harman, a longtime supporter of its efforts, to intervene with the Justice Department. She responded, the official recounted, by saying she would have more influence with a White House official she did not identify.

In return, the caller promised her that a wealthy California donor — the media mogul Haim Saban — would threaten to withhold campaign contributions to Representative Nancy Pelosi, the California Democrat who was expected to become House speaker after the 2006 election, if she did not select Ms. Harman for the intelligence post.

If the "caller" did indeed have authorization from Saban to make such a promise, it would mean that either AIPAC itself and/or its supporters attempted to intervene in an ongoing criminal case and was willing to use extortion against a U.S. Senator to deliver its part of the bargain. (The "caller" has not yet been identified, but that will come.)

It is not surprising that the Israel lobby operates this way, since the primary allegiance of its members is to Israel and not the United States and it represents a wing of the Jewish community that believes any actions are justified in the defense of the Jewish state. One can only hope that more details of this side of the story will be revealed in the days and weeks to come.

By the way, this is one more example where important news is being broken by smaller media outlets and bloggers. Kudos to Congressional Quarterly columnist Jeff Stein for breaking the story.

PS--Read the Times piece carefully to see that Harman may be doing some fancy footwork to avoid admitting to the allegations.

More on Haim Saban. A profile in the Los Angeles Times.
Posted by Michael Balter at 3:00 AM

All I can say is, I think it's fortunate that AIPAC and its minions aren't the only representatives of the Jewish community in the US. Their activities only get in the way of the needed information that Israel is a state like any other, and its actions need to be scrutinized accordingly.
Anne G