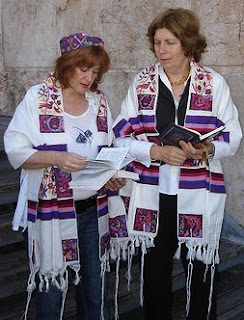 One of the most outrageous aspects of the so-called "Jewish state" is the monopoly given to Orthodox Judaism in deciding not only matters of religion in the country, but also issues that should be strictly civil, such as marriage and divorce. This has long been an embarrassment to American defenders of Israel, the great majority of whom are not orthodox.

According to an article in today's Washington Post, a bill is advancing in the Knesset that would sidestep an Israeli Supreme Court decision that conversions to the Reform and Conservative branches of Judaism must be recognized in terms of eligibility for Israeli citizenship. This is the equivalent of an "Islamic state" recognizing only the most fundamentalist branches of Islam. A few details from the Post article:


Representatives of the Reform and Conservative movements, which have been battling for years for more rights in Israel, saw the committee vote as a threat to their efforts to strengthen their legitimacy in Israel. The chief rabbinate already holds a monopoly on such rituals as marriage and divorce.


"It sets us back 20 years in terms of the advances that were made," said Rabbi Steven Wernick, executive vice president of the United Synagogue of Conservative Judaism, an umbrella organization of Conservative Jewish congregations in the United States, who spoke by telephone during a visit to Jerusalem. "The practical implication of this bill is one that we are very, very concerned about and angry about."
The article reported some additional news about religious bigotry in the country:


Also on Monday, police detained for several hours a woman who carried a Torah scroll to the women's prayer section of the Western Wall, one of the holiest sites in Judaism.

Police said that Anat Hoffman, a leader of Women of the Wall, a group that challenges the limitations put on women's prayer at the Western Wall, had violated a Supreme Court ruling that says women cannot read from the Torah in the area.
People who witnessed the confrontation said Hoffman was not reading from the Torah in the prayer area and had only brought it with her. Hoffman was ordered not to pray at the wall for 30 days.

Photo: Women of the Wall ((Anat Hoffman, rt.)
Posted by Michael Balter at 9:05 AM

Part of this stems from the fact that many original settlers in Israel came from places where the only Judaism was the Orthodox variety9e.g., Pland, Russia). So I guess they just assumed that "Orthodox" would be the standard. But then, after WW II especially, a lot of "secular" Jews settled there, too, and, oddly, few Israelis ended up paying much attention to the rabbis. I remember seeing a film about Israel when I was in college, that showed a typical Saturday in Tel Aviv: There wee gazillions of people lolling on the beach and enjoying the sunshine or something, but then the shot switched to this synagogue and there was hardly anybody there. I also had a friend at one time who visited(I think) a kibbutze; Saturday rolled around, and I guess there was a little house of worship open which hardly anybody ever visited. But she was roped into a group of ten to just "witness", I guess, so they could say they ad a service there. The irony in this was, that she wasn't even Jewish! I thought this was both funny and sad at the same time.

Nowadays, I think there are some really ultar-Orthodox Jews in Israel who seem to want to push their version of Judaism down everyone else's throats. That's why this flap over the Western Wall. And she(oh no! you can't have that!) is a woman besides. Somebody doesn't seem to know, or care, that all fundamentalists, no matter from what religious tradition, tend to think alike. It's very, very sad.

I read this text first on your blog and it interested me for the rest. Nice writing style. Thumbs up for the blog.