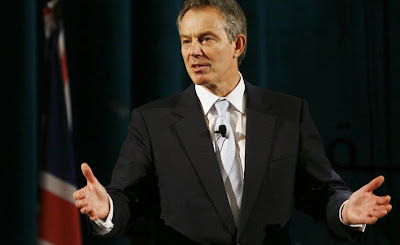 A big debate has broken out in the UK over Tony Blair's announcement that he will donate the entire proceeds from publication of his memoir (which includes an advance reported to be over £4 million) to the Royal British Legion. The money will reportedly go to pay for a new rehabilitation center for the soldiers injured in the Iraq war he helped propagandize and carry out.

The question being debated is whether this should be considered a generous gesture or a sign of a guilty conscience. It seems to me that both are right, since it is often the case that two contradictory things are true at the same time.

And a guilty conscience is better than no conscience at all. Can one imagine George W. Bush making a similar gesture with the profits from his own memoirs?
Facebook photos of soldiers posing with bound Palestinians are the norm. So says the Israeli group Breaking the Silence, quoted in an article in Haaretz.
Posted by Michael Balter at 12:03 PM

it looks like blood money and smells like it to.i would of thought Blair was intelligent enough to have seen this would of created a stir from this gesture and left sleeping dogs lie,maybe he just wanted to remind everyone who is to blame for the amount of British young men in Selly Oak hospital with limbs left behind in foriegn countries for no more than pure greed.