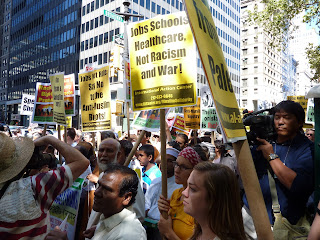 Yesterday, September 11, saw three demonstrations in lower Manhattan: One of bigots opposed to the building of an Islamic cultural center at 51 Park Place; one of left-wing anti-racists in favor of it and opposed to bigotry of all kinds; and a small group of Jesus people who had the idea that their savior was a bigot opposed to all other religions (was he? Comments welcome.)

Regular readers of this blog will know which one of these events I attended, but just in case I submit this photographic evidence. I'm not much of a photographer and even my spiffy new Lumix with a great wide-angle lens didn't allow me to capture the size of this demonstration, which had a pretty good turnout. The police, cited by the New York Times, estimated 2000 anti-racists, and slightly more bigots.

I don't much like demonstrations where only leftists show up, preferring broader coalitions. So perhaps more heartening was an event that took place the evening before, which I did not attend, a candlelight vigil also at Park Place. The Indypendent has a good account of it here with lots of links to the organizations involved.

Of course, it still seems up in the air whether the cultural center will be built on Park Place or whether it will end up being moved elsewhere. My sense, as a part-time New Yorker just newly arrived in town, is that the project will probably go ahead as long as Mayor Michael Bloomberg sticks to his so-far very principled stand against bigotry. It's a sad day when the best position on an issue comes from a political conservative (I'm referring of course to the flock of cowardly Democrats who have come out against locating the center near Ground Zero), but we have to take our favors where we find them.
Update: Nicholas Kristof tackles bigotry and religious intolerance in his column in Sunday's New York Times. And he quotes one evangelical Christian on the question I posed above about what Jesus would do: “Shame on you,” the Rev. Richard Cizik, a leading evangelical Christian, said to those castigating Islam. “You bring dishonor to the name of Jesus Christ. You directly disobey his commandment to love your neighbor.”
Posted by Michael Balter at 10:10 AM