Please read two online accounts, one in the New Yorker and the other posted on the excellent blog Mondoweiss, about a recent incident at the Gagosian Gallery in New York. Just wearing a T-shirt can provoke the thought police into action, especially if anyone gets the idea that Israeli actions are being questioned.
Posted by Michael Balter at 4:00 AM No comments:

Happy Holidays from Down Under 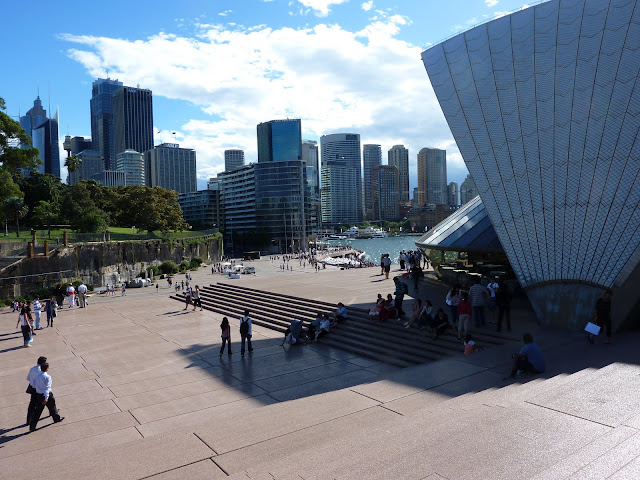 Sydney Harbor (Opera House at right)
Posted by Michael Balter at 2:39 AM No comments:

Julian Assange: Did he or didn't he?

I'm linking without comment to the most detailed and interesting article I have seen yet on the sexual misconduct allegations against the WikiLeaks founder, in the Sydney Morning Herald. Whatever the truth turns out to be, you can bet the American, British and Swedish governments are talking nonstop about how to get Assange extradited to the United States.

The coverage of the sexual allegations in the U.S. press has been pretty poor as far as I can see, leaving the field mostly to the imagination of wild-eyed bloggers, some of whom are trying to connect accuser Anna Ardin with right-wing anti-Castro groups.

I will be based in Sydney for a month beginning in just a matter of days, so I look forward to more stories in the Australian press, which seems to be a little ahead of the game if this article is any indication.

PS--I'd be grateful to readers for links to any other interesting stories they see.
Afterthought: A lot of commentators have criticized WikiLeaks for releasing some documents with the names of Afghans who have been cooperating with the U.S. government. But a story in the New York Times about the unsavory character of one such informer (a drug lord) makes me wonder if Americans are not entitled to know exactly who we are dealing with? Especially as we are sending our young men and women to die in Afghanistan? And dying they are.
Update (or downdate): Another perspective on the accusations against Assange can be found here.

Photo: Macdiarmid/Getty
Posted by Michael Balter at 9:55 AM No comments:

What will the Obama Justice Department do now that the Senate has pretty much killed repeal of "Don't Ask, Don't Tell"? Will it continue to defend the law in the courts--using the lame excuse that it is obligated to do so--or embrace a federal court ruling that it is discriminatory and unconstitutional?

Few today would argue that Congress has the right to decide whether African-Americans or other groups have the right to vote, attend integrated schools, etc. But the Obama administration is taking that position when it comes to gay rights. And for that, it deserves all the contempt it is receiving from those who know better.
Posted by Michael Balter at 8:02 AM No comments: