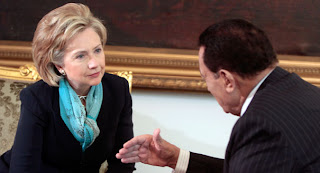 The Obama administration, led by Secretary of State Hillary Clinton, has been telling us for days that Egyptian President Hosni Mubarak shouldn't be forced to resign right now. Why? Because according to the Egyptian constitution, elections would have to be held within 60 days, and that's too soon for free and fair elections to be organized. In other words, perhaps without realizing it, the administration is echoing Egyptian Vice-President Omar Suleiman's comments that his fellow citizens are not yet ready for democracy.

The administration's new-found respect for the rule of law in Egypt would sound more sincere if it had earlier protested against police torture of dissidents and other human rights abuses that I doubt are permitted by the nation's constitution. I wonder if Obama, Clinton, their immediate circle have even read the Egyptian constitution. But other scholars have, and they have also pointed out the illegitimacy of a constitution that was written by a dictatorship in its own interests. One of the most interesting commentaries on the constitutional issues was published recently in Foreign Affairs by Nathan Brown, a professor of political science at George Washington University. Brown agrees that the constitution says what Clinton et al. say it says, but he goes much further in laying out the options:

"So if Mubarak resigned, there would be three choices:
1.) Follow the constitution and wind up with the regime handpicking a successor after 60 days for a full presidential term. That hardly resolves anything. The procedures are written in such a way that Sulayman could be nominated, but it would break the promise both Mubarak and Sulayman made for constitutional reform. This procedure would not even put lipstick on the regime's current face.
2.) Follow the constitution with the promise that the new president (presumably Sulayman) pick up the constitutional reform process. That puts the crisis on hold for 60 days and offers the opposition promises for reform that might be redeemed later -- and might not be. This would put lipstick on, but not much else, particularly given the toxic lack of trust in the regime's promises.
3.) Suspend the constitution and negotiate a transition between the current regime leaders and the opposition. And then we are in regime change territory, operating outside the existing rules. If the process were successful, it would not produce merely a reconfigured regime but would be moving toward a different kind of political system. The opposition has made clear that it wants such an outcome, but it has not sketched out any vision in detail. The negotiations over transition would be difficult and confusing, demanding that the opposition transform its negative platform (Mubarak must leave) into a positive one.
If Mubarak resigned today, the third option is the only one that offers anything like real political change. It may be the best outcome and it is what the opposition is effectively demanding. It may very well deserve our support, but we should know that when we call for Mubarak to step down, then legally at least this is where we are effectively pushing."
Bottom line: if the Obama administration seriously wants to see real political change in Egypt, it has to back option 3, which is what the democracy movement wants. And why not? This is a revolution, after all, and revolutions mean you stop playing by the rules of the rulers and make up new ones. Of course, I'm sure there were those who argued the American Revolution was illegal too...
Update: A paragraph from a New York Times story today by David Kirkpatrick, reporting that the pro-democracy movement is gaining strength as labor unions go out on strike: As reports filtered in of strikes and unrest spreading to other parts of the city and the country, the government seemed to dig in deeper. Mr. Mubarak’s handpicked successor, Vice President Omar Suleiman, warned Tuesday that the only alternative to constitutional talks was a “coup” and added: “We don’t want to deal with Egyptian society with police tools.” In other words, Suleiman is threatening a bloodbath if the movement does not disband. This is the man that Obama and Clinton want Egyptians to trust to make the transition to democracy? Fortunately, the movement is so strong now that Mubarak and Suleiman will soon be swept aside, and American diplomacy will be left empty-handed.
The Middle East doesn't need stability. So argues the always excellent Gideon Levy, in Haaretz. An excerpt: Indeed, that stability should be undermined. The stability in the region, something which Westerners and Israeli have come to yearn, merely means perpetuating the status quo. That situation might be good for Israel and the West, but it is very bad for the millions of people who have had to pay the price. Maintaining Mideast stability means perpetuating the intolerable situation by which some 2.5 million Palestinians exist without any rights under the heel of Israeli rule; and another few million Palestinian refugees from the war of 1948 are living in camps in Arab countries, where they also lack any rights, hope, livelihood and dignity.

This so-called stability encompasses millions of Arabs living under criminal regimes and evil tyrannies. In stable Saudi Arabia, the women are regarded as the lowest of the low; in stable Syria, any sign of opposition is repressed; in stable Jordan and Morocco, the apple of the eye of the West and Israel, people are frightened to utter a word of criticism against their kings, even in casual coffee-shop conversations. Please read it all.

Posted by Michael Balter at 8:38 AM