Is democracy in Egypt good for the Jews? 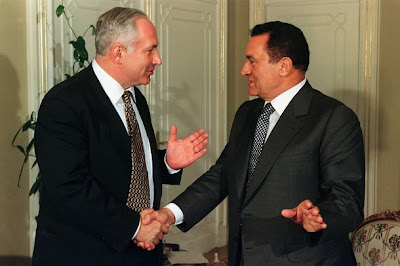 One of the more amusing aspects of the revolution in Egypt is the reaction in Israel. While most of the world is rejoicing over the impending overthrow of a brutal, authoritarian regime, Israelis are loudly nervous about what could come next--so much so that one can't help concluding Israel would much prefer the status quo.

Israeli Prime Minister Benjamin Netanyahu (pictured at right with Egyptian President Hosni Mubarak) has expressed his fears that Islamic extremists, such as the Muslim Brotherhood, could come to power, thus ending the cosy relationship between Egypt and Israel. This relationship has kept U.S. military aid ($1.5 billion/year) pouring into Egypt and has been pivotal in keeping the people of Gaza under lock and key.

Yet while Barack Obama has been smart enough to embrace the tide of events in Egypt, and is now pretty much telling Mubarak that he has to go--a move that will strengthen the hand of democratically-minded Egyptians--Israel just can't help but reveal its preference that nothing had happened and that Mubarak had stayed in power. This viewpoint was well expressed in an op-ed piece in yesterday's New York Times by Yossi Klein Halevi, entitled "Israel, Alone Again?" (Interestingly, the title of the link comes up "Islamists at the Gate" on my browser tab, which may have been its original--and perhaps more appropriate--title.)

Halevi leads off with these hopeful thoughts:

ISRAELIS want to rejoice over the outbreak of protests in Egypt’s city squares. They want to believe that this is the Arab world’s 1989 moment. Perhaps, they say, the poisonous reflex of blaming the Jewish state for the Middle East’s ills will be replaced by an honest self-assessment.


But the rest of the piece tells us that this is very unlikely to happen, and that a takeover by the Muslim Brotherhood is pretty much a foregone conclusion. Of course, this might be wishful thinking on the part of many Israelis, and certainly Israeli leaders, because if Egypt became a democracy--or at least more democratic--Israel would be denied one more excuse not to make peace with the Palestinians and give them back their stolen land.


As things stand now, there is no real reason to think that the Muslim Brotherhood will become the dominant power in Egypt. But if does, it will be thanks in large part to the Israeli and American direct support for Mubarak's suppression of democratic forces all these years, and Mubarak's tolerance of and complicity with Israeli policies. One would think that Israelis would be smart enough now to embrace the revolution underway in Egypt, in hopes that their support of the Egyptian people at this historic moment might pay dividends down the line. Some Israelis are that smart, but they are not to be found among the nation's leaders nor among its apologists.

Update: Tom Friedman also cautions Israel about its misguided attitudes in a Times op-ed piece today. I like his conclusion: "There is a huge storm coming, Israel. Get out of the way."
Sane voices in Israel: As I said above, they can't be found among the country's leaders, but as usual they are featured in the excellent Israeli newspaper Haaretz. Commentator Anshel Pfeffer asks why Israel should be the only democracy in the Middle East and chastises the fear mongers; Amira Hass writes about what she calls the "collective tyranny of Israeli Jews... over the Palestinians."

Is U.S.-Israeli dominance in the Middle East over? So says William Pfaff in a Truthdig post.
Who is Omar Suleiman? Jane Mayer of the New Yorker tells us. In short, he was the man who helped the C.I.A engage in "renditions" of terrorist suspects who were then tortured in Egyptian jails.
Posted by Michael Balter at 3:02 AM