Many are the ways...

... that Israel has sought to cleanse the West Bank of its Palestinians and steal their land.

Yesterday a story in Haaretz by Akiva Eldar detailed how Israel authorities stripped the residency status from 140,000 Palestinians between 1967 and 1994. The details are in a document the newspaper obtained under Israel's Freedom of Information Law; basically their residency permits were cancelled if they stayed abroad for too long, but they were not warned that would happen. 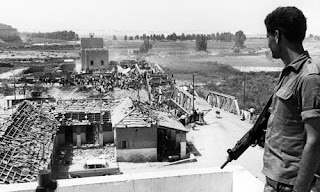 The Guardian also carries the story; should I hold my breath until a major US media outlet covers it also, like the New York Times? Or just let my breath out with a sigh?

Thanks to Mondoweiss for linking to this story. To keep up with what is really going on in Israel and Palestine, be sure to subscribe to their feed, and consider making a donation to these seekers of truth.

Afterthought. All is not bleak, however. CUNY's reversal of its decision to revoke Tony Kushner's honorary degree is a sign that the Israel lobby's power is waning.