Charlie Hebdo and the current controversy within PEN America

Many readers will have read about the debate within PEN America over the past several days, over whether the organization is doing the right thing by awarding the Toni and James C. Goodale Freedom of Expression Courage Award to Charlie Hebdo at its upcoming May 5 PEN Literary Gala. The original six writers who objected to this have now expanded to at least a few dozen. PEN's leadership has responded to the objections, in terms that I think most writers and defenders of freedom of expression can rally around. The title of that response is "Rejecting the Assassin's Veto," and even those objecting to the award agree that murder is not the appropriate response to speech with which we disagree. But throughout the Charlie Hebdo affair there has been a lingering suggestion by some that the 12 murdered colleagues had it coming somehow, because they insulted Islam, Muslims, and/or the Prophet Mohammed. I'm afraid that those who object to the award are in effect buying into that notion, just as some suggested that Salman Rushdie had provoked the fatwah that came down on his head after the publication of "The Satanic Verses."

PEN has now opened up a Web page for public debate on the matter, which has received some very wise comments (and a few unwise ones, in my view.) One of the wisest observations came from writer/lawyer Wendy Kaminer, who took issue with the suggestion that Charlie Hebdo did not deserve the award because it targeted the powerless (supposedly marginalized Muslims) rather than the powerful. Not only is this not true in general terms, but as Kaminer pointed out, Charlie Hebdo continued to publish its cartoons and articles against Islamic extremism despite death threats. That takes courage, as she pointed out:

"PEN protesters might respond that a courage award should only be bestowed on speakers who offend the powerful. It doesn’t take a lot of courage to offend people who can’t hurt you. Charlie Hebdo’s speech targeted the powerless, the 'victimized,' they assert. Not quite. If murder isn’t a definitive assertion of power, what is? The power of the sword has been wielded most effectively; we’ll never know how much speech has been chilled. Most of us are not that courageous."

I posted my own thoughts on this comments page, which I am reproducing here with a few changes (mostly to clean up my typos.) My main point is that Charlie Hebdo should not be defended in spite of what it stood for, 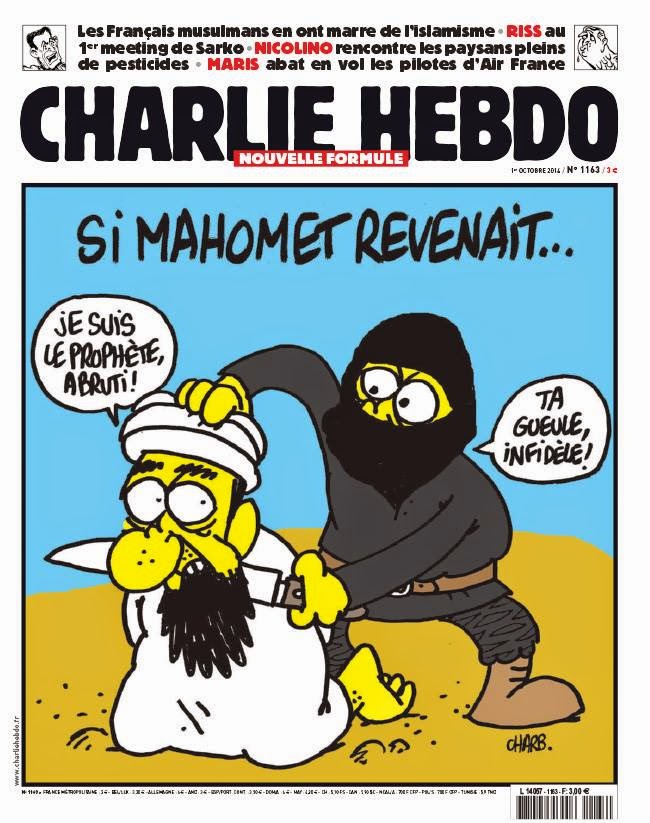 but because of it. Here they are:

I'm very glad to see PEN open this issue up for general comment and debate. I live in Paris about half of the year, and my home is a 10 minute walk from Charlie Hebdo's former offices in the 11th district. I was on the scene, along with hundreds of other journalists, within an hour of the horrific massacre of our colleagues. So this hits very close to home. A lot has been said already, so I want to underscore one key point: In the United States particularly, there is a huge misunderstanding about the cartoons and caricatures that Charlie Hebdo published and what they meant. Charlie Hebdo is a left-wing, anti-racist publication and the cartoons it published concerning Islam, the Prophet Mohammed, etc, were all in that spirit. Charlie Hebdo never attacked or ridiculed Muslims as individuals, but was hostile to all religions; its caricatures and drawings of the Prophet were all intended to attack and satirize Islamic extremists (ISIS, Al Qaeda, Taliban, etc) who used Islam as an excuse for their crimes and brutality. Stephane Charbonnier ("Charb") and other editors of Charlie Hebdo made that clear time and time again in their responses to criticisms of the publication and the cartoons in particular. In his posthumously published book, just out this month, Charbonnier made that clear once again. He rightly points out the difference between attacking individual believers and the religion in which they believe, a distinction that is the basis of French law (which does not go far enough in protecting freedom of expression in my view.) He criticizes the patronizing attitude of many anti-racists on the left (a group I normally count myself among) and suggests that Charlie Hebdo's critics assume that every Muslim is so sensitive to criticism of his or her religion, and so lacking in humor, that they should be viewed as on the verge of committing violent acts (beheadings etc) on a hair-trigger basis. Few members of PEN, and few Americans in general, would consider a caricature of the Pope (say caught committing an act of pedophilia, to take a relevant example) as an attack on all Catholics as individuals, but somehow a caricature of the Prophet (if he was indeed a prophet) is considered to be a racist (or "Islamophobic") expression. To summarize, the controversy over Charlie Hebdo is in very large part based on a misunderstanding of the cartoons, their meaning, and the intentions of the publication's artists and writers. They are not racists but anti-racists who refuse to allow extremists to dictate what they can say and cannot say, write, or draw; they are not colleagues who should be just defended in spite of their thoughts and actions, but also because of them.

Addendum: Just a reminder that I commented on whether Charlie Hebdo primarily targeted Muslims and Islam in an earlier post. Answer = non.

Update: No one has written more eloquently and nailed the key issues in the Charlie Hebdo killings better than Adam Gopnik at The New Yorker, and he does it again today. Essential, vital, obligatory reading for all those who need a lesson in what civilization is really about (and to inspire those who already do know.)

Update II: I've just become aware of an excellent Web site, Understanding Charlie Hebdo Cartoons, which takes a number of cartoons and explains in detail what they mean within the context of French culture and politics. Thanks to a NYT story on the controversy published yesterday, which provided it.
Posted by Michael Balter at 8:10 AM No comments: Links to this post