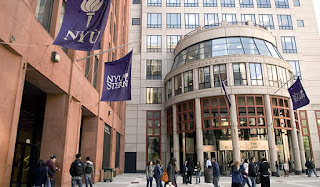 I had a terrible dream a couple of nights ago, and I think I understand it very well. Freud would no doubt be proud of me, even if there was no sex in it.

After teaching in NYU's Science, Health and Environmental Reporting Program (SHERP) for the past six years, I finally decided to take a break and hand my course in journalism fundamentals to someone else. I had a dialogue about this last month with Ann Finkbeiner--who used to run the Johns Hopkins program--on the Last Word on Nothing blog, where science writers get to say pretty much anything they want (within reason; Ann always reminds me that they don't have libel insurance.) We talked about the pain of quitting teaching, how much our students meant to us, and related things. I think I got a bit gushy at times, but as I said there, I think that I have been an important person in the lives of many of my students and I know that they have been a very important part of my life. That's why I have all their photos on the wall of my office.

The evening before I had the dream, one of my students from last semester, who had done a profile of a particular individual (I won't complicate her life by naming her or the profile subject) started getting a lot of flak from someone associated with the subject over a passage in the article. The passage was absolutely true, and the student felt strongly that she should not have to change it--despite being threatened with legal action to "squash" the article. (Really, more people should read the First Amendment and the Supreme Court decisions associated with it, we would be so much better off.)

I applauded and supported her stand, as did her other professors and her fellow students. I know that she greatly appreciated the support. And what a great teachable moment: Journalists are truth-tellers, at least they try hard to be, and that takes a lot of courage no matter how early they are in their careers.

So in the dream, I was walking down a hallway, probably at NYU (although you know how dreams are), when I saw a couple of my former students and started to say hi to them. Suddenly I remembered that I was supposed to have gotten together with them for a drink or coffee or whatever, and they both looked very upset that I had entirely forgotten. Indeed, one of them started to cry inconsolably, tears streaming down her face. I woke up with the shock and slamming heart so typical of a nightmare, and then, relieved that it was only a dream, fell back to sleep--only to wake up again with the dream still going on. Now there was a larger group of students, all of whom were clearly angry at me. The student who had been crying no longer was, but she didn't want to talk to me and rebuffed my apology.

I can assure you that I do not relate my dreams publicly very often (actually never, this is a first for me.) But the meaning of this one is so obvious that I really don't feel very embarrassed about it. If anything it is the deep night sweats terror version of the question I discussed with Ann: What do we mean to our students, and what do they mean to us? A very great deal, as it turns out. And there is just no way to walk away from those bonds; they are for life.
Posted by Michael Balter at 6:03 AM 1 comment:

My own David Bowie story

The world is in extended mourning for David Bowie, rightly so, and many who knew him have been telling their stories. Sadly, I never met him, but over the last decade I have become good friends with his cousin Kristina Amadeus, an art expert and award-winning writer. She has kindly agreed to let me tell a story which demonstrates David's great generosity. Because a number of years ago, David did me a wonderful kindness: After reading my book, The Goddess and the Bull, about the archaeological excavations at Neolithic Catalhoyuk in Turkey and the origins of civilization, he allowed me to put a blurb on the paperback and Kindle editions.

The purpose of this story is not to sell books, so I am not including any links. But here's what happened.

Shortly after the book came out, in early 2005, Kristina contacted me out of the blue with a rave review of the book and some very kind words about how much she enjoyed it. Kristina had long been interested in Catalhoyuk--which is a sort of Mecca for Mother Goddess worshippers but also a very key site for understanding the origins of farming and settled, village life--because of a novel she has in progress which features the excavations. I didn't know who she was, but I thought her name very interesting, and so Googled her. I learned that she was David's cousin, and that she was a well-known fixture in the Ziggy Stardust tour because during it he had visited her in New York (where she was then living) and, of course, every step in that tour is now as sacred as the Stations of the Cross.

I asked Kristina if she thought David might be interested in reading the book, because I knew that he was very intellectual and read a lot. We arranged to get a copy to his New York office and he told her that he would put it on his summer reading list.

The following October, I believe it was, I asked Kristina if he had read it, and she sent him an email. It turned out that he had, and he said the following about it:

"I liked it very much. A little heavy on theory for my taste but exciting to read of what could have been the first town. I also approve of burying the dead under the floor. At least you'll remember where you put them."

The paperback edition of my book was about to come out, so I asked Kristina to ask David if I could put that very funny comment on the book. He wrote her back: "I have no problem with it."

Think about those six words for a moment. They are the words of someone for whom an act of great kindness and generosity is no big deal, just something you do in the course of the day. No thought of whether he should be selective in bestowing such kindness, just a matter of fact favor to his cousin and to his cousin's friend.

And, of course, the publisher of the paperback edition of the book--Mitch Allen of Left Coast Press, recently bought by Routledge--was thrilled that a famous rock star was saying in this amusing way how much theory was in the book, because Mitch was marketing it as an academic book to be used in archaeology classes. What might be a tad too much theory for David Bowie was just the right amount of theory for the undergraduate and graduate students who would be reading it.

Do you ever have a fantasy that you will meet a famous person one day, sit down with them as if they were just a normal person, have coffee, and talk matter of factly about the issues of the day? I did, and it was always about David Bowie. I always thought it might happen, but now of course it never will. But I have his music, his videos, his blurb proudly displayed on my book--and his cousin as my friend, with whom I can share all the pain and sorrow that the last week has brought.

Update: Kristina has just sent me the old email correspondence from when this all happened. After David said he liked the book, I suggested that he could do the rock opera version and that it would be okay if he left out most of the theory. His response to that was "LOL!" So I made David Bowie laugh one day long ago. That really makes my day today.