It's been about 10 months since the last curator of human origins at the American Museum of Natural History in New York City, Brian Richmond, was forced to resign his post after an investigation into allegations of sexual harassment and assault. And since Richmond was not allowed to work in the museum during the investigation, which took up most of 2016, that makes nearly two years that the AMNH has gone without an effective individual in that post. It's been a real loss for the public, as well as for biological anthropology and human origins research, because the curator was often seen as the field's public face. That was certainly the case during the many years that Richmond's predecessor, Ian Tattersall, held the position.

One possible reason for the delay is financial: In its settlement with Richmond, the museum agreed to pay him a full year's salary after he resigned, that is, for the entire year 2017. I guess the AMNH cannot be blamed for not wanting to pay the same salary twice

Now, finally, the job has been posted, apparently in time to get a new curator into position by January 2018. Whoever the new winning candidate turns out to be, I hope the museum will vet him or her thoroughly not only for their academic and research credentials, but also for their ethics. A closer look at Richmond's behavior before he was hired might have avoided this long and embarrassing episode for the museum. I say "might," of course, because there are no guarantees.

But the Richmond case, along with the fall of Harvey Weinstein and many others over the past few years, does carry one lesson that I hope will be taken seriously by would be sexual predators: The consequences for sexual harassment and assault can be very severe. The tide is turning, the culture is changing, slowly, but irrevocably.

Posted by Michael Balter at 9:00 AM No comments:

A "Second Chance" for Harvey Weinstein--Already?

Last Sunday, according to the New York Times, Harvey Weinstein sent an email to agents and studio executives begging them not to allow him to be fired. "Whether it be in a facility or somewhere else, allow me to resurrect myself with a second chance."

Weinstein made this same plea for a second chance in his statement to the Times in response to its October 5 story revealing that he had sexually harassed actresses and others over a period of at least two decades. "I want a second chance in the community but I know I've got work to do to earn it," he wrote.

For the past two years, I've been reporting on sexual misconduct in the sciences, which--like the film industry--is still largely dominated by powerful men, some of whom see preying on younger female colleagues as just one of the perks of their power. When caught, they either deny what the evidence clearly shows they did, or, like Weinstein, start making the rounds of colleagues and also asking for a "second chance."

All too often, when a harasser asks for a "second chance," it means they want no consequences whatsoever for what they did. That's essentially what Weinstein was asking for when he pleaded with industry colleagues to save him from being fired: A little time off for some therapy and counseling, and then full restoration to the position of power that made it possible for him to do what he did over and over again.

Whenever I can, I link to a very insightful commentary published in Forbes in early 2016, by Janet Stemwedel, a philosopher at San Jose State University who studies sexual misconduct in the sciences. It's title is "Advice for the Reformed Harasser On Rejoining the Scientific Community," but I think it applies to any field or industry where sexual misconduct is rife. Stemwedel lays out six criteria by which a harasser might be deemed to have been rehabilitated. Her title is somewhat tongue in cheek, however, because her real point is that too many harassers are asking for forgiveness and second chances long before they are actually reformed.

The six criteria are:

1. Own what you did.
2. Accept the descriptions of the harm you did given by those you harmed.
3. Have your defenders stand down.
4. Avoid the limelight.
5. Don’t demand anyone’s trust.
6. Shift your focus to work that supports your scientific community, not your individual advancement.

For each of these points, Stemwedel provides wise counsel on what they would entail for a harasser who really is undergoing rehabilitation. Indeed, I don't know of any recent case, in the sciences or elsewhere, in which the accused harasser has fulfilled any one of the six criteria, let alone all of them. All of the harassers I know and have written about have yet to get past step one, admitting what the evidence plainly shows they did. Even Weinstein, despite his statements of remorse (now that he has been caught out) is denying much of what he is accused of, especially in Ronan Farrow's devastating piece in the New Yorker.

This week I've been having an email debate with an old friend (a woman, as it happens) about whether those accused of sexual harassment can be rehabilitated and returned to the community, just as we hope to do with those accused of crimes and sent to prison (which almost never actually happens in the case of the Weinsteins of the world.) My friend is concerned that in the swirl of moral outrage we are losing sight of this humanitarian goal.

Yes, people can and do change, and it's not entirely unreasonable for accused harassers to ask for a "second chance." But that plea should come in the future, not right now. It should only be voiced when, by their actions, abusers can show that they have fulfilled criteria for rehabilitation similar to those Stemwedel has spelled out. And, very importantly, it should be clear what a "second chance" really means. In my view, it should not mean that guilty parties be returned to the positions of power that allowed them to exploit others and cause them to suffer (and in many cases, abandon their own careers before they have even begun.)

If all goes well, Weinstein will never return to a position of power in the film industry. Never. And that's exactly as it should be.

Afterthought: If Weinstein really wants us to believe he is on the road to reform, he can start by releasing all of his alleged victims from the nondisclosure agreements he and his minions have forced them to sign. 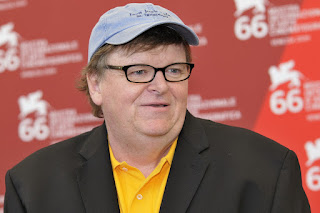 I've just returned to the USA after 29 years of living in Paris, and my darling New Yorker daughter thought it would help my adjustment if she took me to see Michael Moore's Broadway show (although I have been spending several months here each year, teaching at NYU, there's nothing like being totally stuck here to heighten awareness.)

It was, indeed, a big help. The show was much better than some of the negative reviews had led me to believe, even if Stephen Colbert's guest appearance seemed to me a low point rather than a high one (too much mutual congratulation for my taste.) But Moore did set the mood properly when he came on stage and started tossing rolls of paper towels into the audience. (For those who have been on another planet these past days, that's what Donald J. Trump did during his visit to Puerto Rico.)

Moore annoys a lot of people, especially those who don't agree with his left-wing politics, but even many of those who do agree with him on most things. But anyone who saw the Trump presidency coming from miles away, as Moore did, deserves a lot of attention in my opinion. Moore not only saw that, but he had a keen understanding of the reasons for it.

That's why I paid special attention when he told us that we should forget about convincing Trump voters to stop being assholes and get on with the job of taking back the country, as they say (Moore, to his credit, did not say that.) That's not what I have been saying since the election, but for the moment at least I think he is probably right. Moore pointed out that if the 90 million people who didn't vote in the last election had done so, we would not be having this conversation (I am paraphrasing him, and have not fact checked those numbers, but you get the point.) And his basic message was that everyone needed to find just a little time to help turn the corner on the current national catastrophe we are living through, each in their own way. It didn't require big sacrifices of time and energy, he argued, just a lot of people doing a little bit.

He reminded me that I am starting to think many of us are spending way too much time at our computers, talking to each other on social media, and too little time doing that little bit that he is talking about. I think it's obvious that is true, given how much time I and many others spend online. Just a 10th of that time each week, doing something to keep the fight going--a meeting, telephone calls to Congress people, etc.--would make a huge difference.

The thing I appreciated most about Moore's more than two hours on stage was the passion he was able to muster, even after doing his show for the 75th time last evening, for building a progressive mass movement, the only solution to the tide of reaction and racism that is now sweeping over us. When his critics can match that passion, I might take them more seriously. Until then, Moore, annoying as he may sometimes be, is my role model.