Yesterday SAA president Joe Watkins, who has a positive reputation in the field and who many view as a "change agent" in SAA and archaeology in general, agreed to a Skype call today so that I could correct the record about what happened. I highly suspect that Joe has been given misinformation by SAA staff, and I wanted to talk to him about that very serious matter.

This morning, however, Joe rescinded his agreement to talk to me, saying that he wanted to give priority to victims and other SAA people. I could agree with this in principle if it did not leave standing the false information that SAA is still spreading on its Web site and perhaps more privately--and that the outreach that Joe and SAA executive director Oona Schmid have done to the victims has been miserably inadequate and in some cases nonexistent.

I suspect that SAA is privileging the jobs of its staff over the welfare of victims, specifically communications director Amy Rutledge and Oona Schmid, who are widely seen in the archaeology community as having badly mishandled this situation--especially since SAA's outgoing president made a big deal during the meeting's opening session about the new sexual harassment guidelines for SAA meetings, printed prominently in the front of the program book. The possibility that Amy Rutledge in particular misled her colleagues about what happened needs to be looked into by the SAA board, in my opinion and that of other colleagues.

Here is the followup email I sent to Joe once it became clear that he was no longer willing to talk to me. I have redacted the names of certain individuals to protect their privacy, but Joe knows who they are.


Joe, I continue to be concerned that you have received inaccurate information about the course of events on Thursday April 11 and the background to them. So I am going to lay them out here, for the record.

1. I knew about the Title IX proceedings against David Yesner many months before they were concluded, based on ________ sources in the Dept of Anthropology at University of Alaska, Anchorage.

2. When Anchorage station KTVA broke the story of the Title IX conclusions and soon afterwards the Chancellor's upholding those findings and her decision to ban Yesner from UA, I did some additional blog posts on these matters based on information provided by _____________________.

5. I went to the staff room to make a report. I asked the three young colleagues there (two women and a man) how to go about making a sexual harassment report. They said I had to talk to Amy Rutledge [SAA director of communications], and went to get her.

6. At about 10 am I engaged in a conversation with Amy Rutledge. I told her all about what happened at UA, that there were three victims of Yesner at the meeting, that they were scared and distressed, unable to attend their sessions, and had asked me to help them. I also gave her all the background in the points above.

7. Amy listened to me but to be honest she seemed to think I was crazy, even though I was doing the right thing under the circumstances. I offered to go on the internet with her then and there and show her the media coverage of the UA/Yesner situation. She declined to do that.

8. Amy did say that she would "take care of it" or "take it from there," but seemed reluctant to give me her contact details and let me call her later in the day to get an update. Eventually she did give me those details and we agreed that I would call her by the end of the afternoon.

9. Not feeling reassured by Amy's attitude, with the help of ______ and _______ I tried to find Yesner. They would report to me where he had last been spotted. I finally found him in the exhibition hall.

10. I told Yesner that he had to leave, he resisted at first, but using the power of embarrassment (raising my voice with others around) he agreed to go and I ushered him out. I did not use physical force of any kind, nor were police involved, as some rumors would have it.

11. Immediately after he left I went back to Amy and told her what had happened. She had little reaction other than surprise. I did tell her that the victims were afraid Yesner would return, and of course he did the next day.

12. As you probably know, I tried to call Amy as agreed in the afternoon but she never responded to cell phone calls nor to emails. I called her again Friday morning and left what I would fully admit was a necessarily insistent message that something be done. This was fully justified under the circumstances.

13. On Friday morning just after 8 am you and Oona [Schmid, SAA executive director] called to say I was banned from the meeting. [for violating the Code of Conduct, although the exact charges against me were never specified]

Any information you have that deviates from the above account would be false. I continue to hope that you will talk to me and pose any questions you have.


Update: Since this was posted, SAA sent out the following Tweet, which has incensed the archaeological community even more. 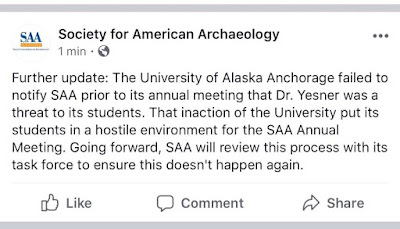 Posted by Michael Balter at 2:11 PM

My question, as an outsider, continues unanswered: was this man ever arrested and convicted of these charges or was it just the university in Alaska that deemed him guilty? Let's remember that a person is always presumed innocent until proven guilty in a court of law.