Lying about industry ties, gaslighting his followers, abusing his wife: Why the facts about University of Florida scientist Kevin Folta are important and his financial information is relevant [[Updated]] 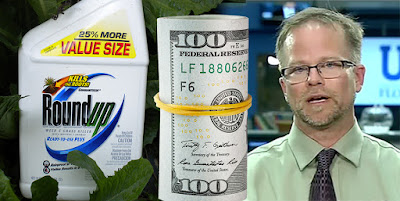 Over the past 24 hours a group of us have had yet another fierce Twitter exchange with University of Florida researcher and self-proclaimed "science communicator" Kevin Folta. To make it easier for everyone, especially Folta's followers and supporters, to understand why I have published documents detailing his financial ties to industry, I have assembled some of the most important materials on Folta in one place. Sadly, Folta, no doubt at one time a talented scientist, has become widely known as the poster boy for conflicts of interest in science, even among those researchers who otherwise agree with his enthusiastic embrace of modern biotech methodologies and the use of GMOs in agriculture.

To be clear, Folta has a perfect right to advocate for biotech, GMOs, and anything else he wants to support. But he does not have a right to hide his real and potential conflicts of interest; transparency about them is key to evaluating the validity of his arguments.


--A 2015 New York Times story by Eric Lipton detailing Folta's lack of transparency about his ties to industry, especially Monsanto. Folta sued the Times and Lipton for defamation but lost the case.

--Folta was forced to step down as department chair of UF's horticulture department in the wake of allegations by his now ex-wife that he abused her.

--Folta lied repeatedly to critics, colleagues, and on social media about his $600/hour consulting for Bayer; he ended up being outed by some of his former allies in the biotech world for his conflicts of interest and for his dishonesty about them.

--After being outed for lying about his consulting for Bayer by biotech colleagues, he continued to lie, making it necessary for me to publish documents proving it beyond any doubt.

--To provide a fuller picture of Folta's financial entanglements with industry, I have begun publishing on Twitter details about his stock holdings in Bayer (Roundup and GMOs), Altria Group (tobacco), the former DowDuPont (pesticides), and other companies whose products and activities Folta pretends to be an impartial scientific arbiter of.

--For a scientific view on why full disclosure of even potential conflicts of interest is so important to the integrity of science and medicine, see this open access letter by Naomi Oreskes et al. This is particularly relevant to Folta's gaslighting of his followers about conflicts of interest. On social media, in response to the criticisms, he has challenged critics--including myself--to detail how his association with industry has affected the conclusions of his research or his public statements, and demanded to know what is factually wrong about them. But the so-called "funding effect" on research, which Oreskes et al. describe in detail, is very well understood among researchers. By attempting to mislead both followers and critics alike about such a bedrock principle of scientific integrity, Folta is damaging the reputation of science to suit his own self interests (which include a great deal of money that has gone into his own pockets.) As Oreskes et al. put it:

"Scientists whose funding sources have been questioned have
sometimes asserted that their analysis was not influenced by the
source of their funding. The problem is that they have no way
to know that, and neither do those who rely on their results."

--Many additional details can be found in this roundup of Folta facts by U.S. Right to Know, and a 2015 BuzzFeed story about how Folta uses alter egos to push industry positions on scientific topics.


Folta claims that his critics have a vendetta against him because they are against science and so attack him for being a "science communicator." The truth is that Folta's conflicts of interest and lack of transparency about them--to the point of wholesale lies when he is caught out--have played an important role in the erosion in public trust of science over the years. When the public sees that a publicly funded researcher is basically bought and paid for by industry, and endorses the safety of products made by companies that are secretly paying him huge amounts of money, the understandable result is cynicism about science.


Update on the spousal abuse allegations:

As I mention above, Folta's ex-wife publicly accused him of abusing her around the time they were going through their divorce. As evidence, she produced a letter written in May 2018 by the director of a women's shelter who had been a friend both of Folta and his ex. Excerpts of the letter have been published previously, but I have been given permission to excerpt from it here. I want to do that with a very specific incident that the shelter director witnessed first hand in her home, where Folta and his ex-wife were overnight guests. I have redacted it to protect the identities of everyone except Folta.

Kevin and [his ex] had started a tradition of coming to visit us each New Year. We welcomed them into a group of our friends in Wisconsin who celebrate together every year. On this occasion, it was fairly late at night. We...were in our living room talking. [Folta's ex] was sitting in a chair opposite me in the room, she had her laptop in her lap and she was answering emails, though still engaging in conversation we were all having. Kevin was talking about something and didn’t like that [his ex] was looking at her computer. He walked over to where she was seated with her foot hanging over the arm of the chair and he kicked her. There were two things that concerned me in addition to him kicking someone in my house. 1) the look of anger that was on his face and 2) her lack of reaction to this explosion. She responded as if it was no big deal which concerned me that this has happened to her before. She looked at Kevin and sheepishly replied “geez”. He yelled, “I was trying to tell you something and you aren’t listening!” He then stormed into the kitchen where she followed and I heard her apologizing to him and him just saying “you should listen to me when I’m trying to tell you something important”. Shortly after, [Folta's ex] went to bed. I asked [my husband] if he was going to talk to him or if I was. [He] wasn’t sure what to do. Kevin came in the room as if nothing happened and starting joking around with [her husband]. I decided to go to bed and address it in the morning.

I got up early as I knew Kevin would be up early on his computer. I told him that if he ever brought violence into my house again he would never be welcome. He tried to tell me he was just joking around and I said “don’t insult my intelligence; I saw the look on your face”. I advised that he needed to get some help. He offered the usual excuses of being so stressed out and he just needs sleep and he was sorry. I offered some sympathy, but reiterated that he needed to get help and that he better never be violent again.