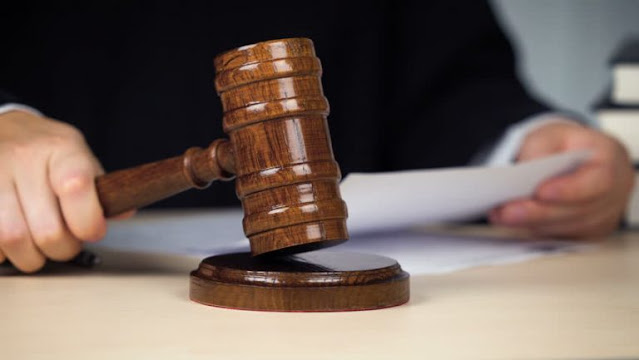 On January 5, my attorneys in the Kurin v. Balter defamation case sent a letter to the judge (Vincent Briccetti of the Southern District of New York, White Plains branch) asking him to consider an early motion for summary judgment in light of New York's new "anti-SLAPP" law and other developments. The background and details of our letter motion can be found at this link.

Yesterday,  January 7,  Judge Briccetti ruled against us, "without prejudice," meaning that we can renew our request for summary judgement after discovery in the case has been completed (on the current schedule, that would be in May.) Please see below for the judge's brief decision.

In his ruling, the judge apparently agreed with certain arguments made by Kurin's attorneys (for a link to their response to our letter motion, please see here). Among other arguments related to the applicability of New York's anti-SLAPP law to our case, the plaintiff argued that our motion was premature and that "This Case is Not Ripe for Summary Judgment."

Naturally we are disappointed in the ruling, because we considered that the new law was very relevant to our situation, because it is intended to prevent frivolous lawsuits. Such lawsuits can stifle free speech, causing pain and suffering to journalists and others, expense for both sides, and needless waste of court resources.

On the other hand, we are still very confident in the strength of our case--which relies heavily on the validity of my reporting about Danielle Kurin--and we believe that discovery will only strengthen that case when we do move for summary judgement later on. My reporting was based on solidly documented evidence of Kurin's misconduct, along with a number of supporting sources and witnesses, and the continuation of the case will only lead to more facts about that misconduct coming out in the case and publicly.

Speaking personally, and giving my constitutionally protected opinion and belief, I was astonished at the boldness with which lawyers for Kurin attempted to mislead the judge about the facts of the case. I should not have been, because Kurin's Complaint against me is absolutely chocked with falsehoods. But let me pick up on a few examples.

1. Kurin's attorneys begin their letter to the judge with prominent mention of an ethics complaint that has been filed against me with the National Association of Science Writers, the professional organization that I have been a member of since 1986. As I detailed in an earlier blog post, that complaint, concocted by a group of anthropologists who have long opposed my #MeToo reporting and leaked to the plaintiff, has not yet been adjudicated. That means I have not yet been given an opportunity to respond to the false allegations, and may well be acquitted in the process. Flagging it to the judge in the first paragraph of their letter was a blatant attempt to prejudice the judge against me.

2. Kurin's attorneys misrepresent the circumstances under which Science ended my contract after 25 years of service, clearly hoping the judge would not read the document they linked to which clearly demonstrates that they quoted me out of context.

3. Kurin's attorneys told the judge that I had engaged in "harassment... so severe and pervasive that over two years ago, one of the individuals targeted by Mr. Balter committed suicide." Again, Kurin's attorneys were apparently hoping the judge would not read the post they linked to, which explains the circumstances and puts the blame squarely where it belonged--on the accused harasser's own institution.

5. Once again, Kurin misrepresents the circumstances of the Title IX findings against her in 2016, that she retaliated against students who reported her then fiance, and later husband, for sexual harassment. Those findings led to a three year administrative leave, from which she only returned in fall 2019.

As the case continues, we are accumulating documents and witness testimony that support my reporting about Kurin. At its heart, this lawsuit is about the rights of survivors of abuse to tell their stories free of retaliation and intimidation. It is also about the freedom of journalists who help survivors do that. The fight goes on.

The judge's decision:
Docket Text:ORDER denying without prejudice [23] Letter Motion for Conference: For substantially the reasons set forth in plaintiff's counsel's letter of 1/7/21, the Court will not schedule a pre-motion conference at this time. At the close of discovery, defendant may renew his request for a pre-motion conference in advance of moving for summary judgment. (HEREBY ORDERED by Judge Vincent L. Briccetti)(Text Only Order) (pp)

“Plaintiff was never adjudged guilty, rather, in a non-adversarial proceeding, investigators found that there was reason to believe that allegations that Plaintiff retaliated against a complainant when she wrote in an email to the complainant “bioarchaeology and forensic archaeology are small fields and your achievements will certainly precede you,” and when she contacted students to ask if they participated in an investigation, may be founded. That’s it.”

Are you fucking kidding me, "That’s it"?! That is plainly intimidating her students into silence and threatening to ruin their nascent careers. This is what they’re attempting now with their “tracker” footnote bullshit, and it clearly has nothing to do with Balter supposedly writing his own comments. Track this, evil bitch!

That the lawyer uses terms like “non-adversarial proceeding” but completely fails to even mention Kurin’s three-year *forced* administrative leave following her Title IX investigation is quite outrageous. This was certainly *not* a long paid vacation courtesy of UCSB. Let us all be aware that it wasn’t just teaching and service at the university that she was debarred from, but she was further requested to withdraw as chair and committee member from current BA/MA/PhD supervision of students, both at UCSB *and* in other universities in the US and abroad. These are as severe sanctions as can be imposed on an assistant professor, without being dismissed.

Michael Balter said…
The last comment illustrates the key problem with Kurin’s case. My reporting was solidly based on documents like the Title IX investigative findings and many witnesses to that and similar misconduct over the years. The best possible outcome for Kurin would have been an early summary judgment against her and the end of the lawsuit. Instead, we will now to through several more months of discovery, which will produce mounds of additional evidence for our side of the case, and will end either in summary judgment against her or her loss at trial. Over those months, she will rack up huge amounts of attorney’s fees, in addition to what she has already spent, and of course we are also asking for attorney’s fees and court costs. It’s one of those be careful what you wish for situations.

If you look back at all of my blog posts about Kurin since February 2020, and the evidence I present in each one of them, you will see the huge weight of evidence against her and the basis of my reporting—no rumors, no second hand or hearsay evidence, but first hand victims, survivors, witnesses, and documents. Did I make this all up, really? So what is the lawsuit really about? I have my own ideas, but I will leave it there for now.
January 8, 2021 at 9:22 PM