In Brazil, scientists, students, advocates, and journalists show us how to deal with sexual abuse cases. [Update Dec 13: Avilla has been suspended by his department pending a university investigation]

Earlier this month, I reported on a shocking number of sexual harassment, assault, and bullying accusations against paleontologist Leonardo Avilla of the Federal University of the State of Rio de Janeiro (UNIRIO). This reporting came about after I was approached by another paleontologist in Brazil, Mario Dantas, a fierce advocate for victims of abuse who had compiled a number of testimonies by victims and survivors of Avilla's misconduct. I first published a Twitter thread on the accusations, and then followed up with the blog post on December 4.

The result was an explosion of outrage among Brazilian scientists and #MeToo advocates and activists, who had all heard these kinds of stories so many times before. And last night, December 12, the popular Brazilian television program Fantastico devoted a full 13 minute segment to the charges, which readers can view at the link (I will provide a synopsis of the Portuguese language program in English below). As a result of all the publicity, UNIRIO--whose officials had been told about Avilla's conduct for years but did nothing--has finally opened an administrative inquiry into the allegations; sources tell me that other legal actions are likely to be launched very soon.

Avilla's initial reaction was to Tweet a statement that included clear threats against the survivors and their allies for making the accusations public. But that did not dissuade victims from appearing on the program, albeit with most of their identities hidden to protect them, and it obviously is not going to help Avilla avoid the consequences for his actions at long last. Of course, in the first days after the accusations became public, a number of parties, including Avilla's attorney (who appeared on the Fantastico program), insisted that there was no proof against Avilla and that he was being subjected to a public inquisition. The fact that there are currently some 36 witnesses against him did not seem to interest these skeptics, nor did any of them express sympathy for survivors in any way--very typical of the way these cases often go down.

I think there is a lot to learn from this case about how to deal with #MeToo situations in academia and elsewhere. First, when an institution ignores or tries to cover up years of misconduct, you abandon hope that there will be justice without going public in a big way. Then, you find journalists who have shown commitment to these issues and approach them with the story. At the same time, you talk to survivors and provide them with the support to be brave and act together to expose the abuser. When the story does go public, you approach even more journalists with higher profiles and platforms--such as the reporters at Fantastico--and show them how much interest there already is in the story.

Of course, in the case of Leonardo Avilla, the fact that there were so many victims of his abuse made it easier to do all of this. But still, our Brazilian colleagues have shown us how it can and should be done.

What you don't do is rely on "whisper networks" to protect vulnerable students and others from abusers, because only those who are privileged enough to be part of the network get the word; you don't allow legal threats or other pressures to dissuade you from seeking justice (an excuse even tenured professors often use); you don't gaslight the victims into thinking that they were somehow responsible for the actions of others more powerful than them; you don't leave it to others to take up your own responsibilities; and you don't try to discredit journalists and advocates who show their commitment to these issues time and time again (I speak as a frequent victim of just such underhanded tactics).

As they say here in the U.S., if you see something, you say something.

I will continue to update this reporting on the Avilla case, which in many ways is just beginning. Bravo to all the brave colleagues, from the most vulnerable to the most influential, who decided that this case was just one injustice too far.

An English language synopsis of the Fantastico program, based on notes kindly provided by Mario Dantas

A professor of paleontology at UNIRIO is being accused by students and fellow researchers of moral and sexual abuse.
The cases came to light on the internet, when paleontologist Mario Dantas, from the Federal University of Bahia, published the reports he had heard, without mentioning Avilla's name.
American journalist Michael Balter read the reports and published Leonardo's name, inviting victims to contact him privately.
Avilla always began the approaches to his victims by acting friendly and kind. Later he would tell sexual jokes, justifying that this was necessary to create an intimacy so they could work better together.
Geoscientist Cristina Bertoni appears on camera. She wrote a paper with Avilla, but because she refused to have sex with him, he published the article without her name.
Avilla's lawyer appears on camera. As defense arguments, the lawyer insisted that all was consensual; that relationships between men and women were normal, have taken place since the beginning of the humanity, and promote the perpetuation of the human species.
The lawyer claimed that Leonardo tried to kill himself as a result of the charges, failing to mention that Leonardo's behavior promoted mental illness and suicidal thoughts in several of the students. [MB: There is no indication whether the suicide attempt actually took place and if so, how serious it was.]
UNIRIO has launched an administrative proceeding after biology students filed a formal complaint. In a statement, the rectory said that it repudiates harassment of any kind.
Update Dec 13: Avilla has been suspended pending a university investigative procedure. 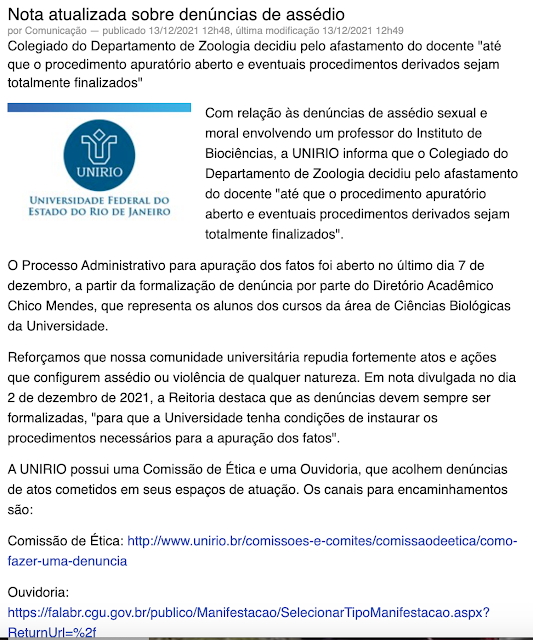 Michael Balter said…
Re the last comment: I am sure our colleagues in Brazil will have something to say about this, but as a #MeToo reporter who has talked to hundreds of victims over the years, they do not trust anyone. Perhaps Avilla’s wife knew all about it. It’s for her to say. Danielle Kurin knew all about her husband’s harassment of students she brought down to Peru, just as an example, but she stuck with him anyway for many years.
December 13, 2021 at 7:56 PM

Camila Placido said…
Hi Michael, thanks for the amazing work you've done on this case. I was one of Leonardo students who gave up on my career because of his assaults. I've been trying to find someone I could talk to about this (I'm trying UniRio but still got no answer). Do you know how I can get to the victims' lawyer? Thank you!
January 23, 2022 at 3:10 PM

Michael Balter said…
Thank you, Since I don't have your contact details I can only reply here. You might contact Mario Dantas who has been very involved in this case.
January 23, 2022 at 3:12 PM