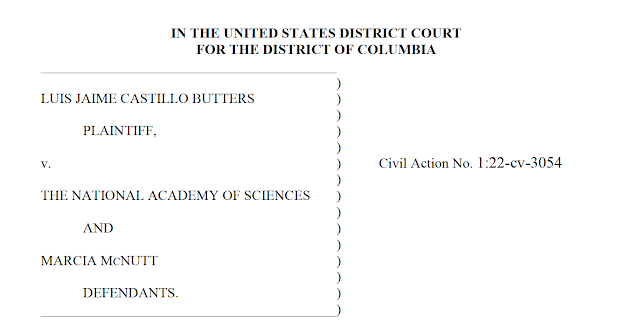 On October 12, Luis Jaime Castillo Butters, an archaeologist at Peru's Pontifical Catholic University (PUCP) in Lima, Peru, sued the National Academy of Sciences and its president, Marcia McNutt, for $5 million in damages. Castillo, who is also a former Peruvian minister of culture, accuses the NAS and McNutt of defaming him when it expelled him from the Academy in October of last year after an internal investigation confirmed previous allegations of sexual harassment.

The lawsuit came in the wake of a defamation judgment he obtained in a Peruvian court last May against Marcela Poirier, an anthropologist he accuses of being involved in his expulsion from NAS. Just yesterday, October 20, Marcela and her attorney made their case in front of an appeals court for the judgment to be overturned. Further proceedings are scheduled in two or three weeks before the appeals court makes its decision.

Marcela has received a great deal of international support, as I reported earlier this year (for all of my reporting on Castillo and the allegations against him, please see the bottom of this post.) On October 17, for example, the United Nations Human Rights, Office of the High Commissioner issued a statement expressing the concern of UN experts that the Castillo case represented criminalization of women activists and an attempt to silence victims of sexual harassment. As the experts noted:

“If the court’s decision stands, it could silence other victims and survivors of sexual violence and prevent them from speaking out against their aggressors,” they said. "Defending against a defamation claim can be costly and stressful, leading to potential re-victimisation and mental trauma.”

In his Complaint against NAS and McNutt (see link for pdf), Castillo, who is represented by attorney Milton C. Johns of Fairfax, Virginia (who has no discernible defamation law experience), accuses both the Academy and McNutt of issuing press releases and other statements about his expulsion. However, no press releases of this kind are attached as exhibits--probably for the simple reason that, as far as I am aware, no such press releases were ever issued. Rather, the NAS press office responded to inquiries from reporters, including me, to confirm what was already clear on the membership page: That Castillo was no longer a member.

In another remarkable faux pas in the very sloppily compiled Complaint, Castillo insists that he is not a public figure in the United States, thus supposedly lowering the standard of proof for him to win a defamation case (public figures must show "actual malice" to win such cases.) (Sect. 30.) But in Sect. 2 of the Complaint, Castillo claims to be a "prominent and world-renowned scientist..."

Which is it? (Note that Science has done two stories about Castillo, and I have done many myself.)

I am sure that the NAS's attorneys will be able to make a good case for quick dismissal of the lawsuit. As the journalist who originally reported the allegations--based on direct testimony from victims and other witnesses, and not rumors or second hand reports--I am very well aware how strong the evidence against Castillo actually is. And, although U.S. Court districts have so far disagreed on whether so-called anti-SLAPP legislation against frivolous lawsuits designed to silence people apply in federal court, DC has a strong law in this regard, which could be decisive in this case--since Castillo is claiming the supposed defamation took place in the District of Columbia.

As in his attacks on Marcela Poirier, this lawsuit is another in a long series of actions by an accused sexual harasser (the allegations were found by the sexual harassment commision of his own university to be highly credible) to viciously retaliate against his victims and those who support them in the U.S. and Peru.

And while he has not sued me yet, either in Peru or the U.S., Castillo can be assured that I would defend any such lawsuit with the same determination as in the Danielle Kurin case (a former archaeology prof at University of California, Santa Barbara who was forced to resign in disgrace.) Indeed, I have reason to believe that Kurin has actually helped Castillo in his retaliatory behavior, based on questions I was asked when I testified in Marcela's trial.

I assume, or at least I hope, that such a multi-million dollar lawsuit against the National Academy of Sciences and its president (who, full disclosure, is a former editor of Science, where I worked for 25 years) will garner the outrage, publicity, and quick dismissal it so richly deserves.

Andean archaeology has a #MeToo problem

A case study in lying [by Castillo's friends and supporters]

Did [Castillo]... try to shake down Yale for an honorary PhD?

Support builds for Marcela Poirier [victim of retaliation by Castillo]

Peruvian anthropologist Marcela Poirier is taking a hit for survivors...

Update Oct 21: Science weighs in with its story on the lawsuit.

Update Nov 10: NAS and McNutt move for dismissal of the case

On November 3, the Defendants in the case filed a motion to dismiss Castillo's lawsuit on the grounds that he had failed "to state a claim upon which relief can be granted." The motion was accompanied by a Memorandum of Points and Authorities which lays out these grounds in detail, or rather, discusses the complete lack of detail about just how NAS and Marcia McNutt had allegedly defamed him. For example, Castillo had claimed that the NAS had put out a press release and other press statements about his ejection from the Academy, but failed to provide these as exhibits in his original Complaint. There is a simple reason for this: No such press releases or press statements were ever issued.

I will be monitoring the case closely to see how the judge handles this motion; I hope other reporters will do so as well. It's not every day that the U.S.'s top scientific body gets sued for defamation.

Update Nov 19: Castillo has now filed his opposition to the motion for dismissal discussed above. It features a number of false statements, but I will hold off commenting until the judge makes her decision.

Update Dec 6: Last night attorneys for NAS and Marcia McNutt filed additional documents in support of their motion for dismissal for failure by Castillo to state a valid claim. The documents can be found here and here.

Anonymous said…
Who is bankrolling his lawsuit? His official PUCP salary is quite low, probably no more than 45k USD per year. The thousands of dollars he got through corrupt dealings over the years have probably dried up by now. Urton? Stanish? Larry Coben? Kurin?
October 23, 2022 at 1:29 PM

Michael Balter said…
Thanks for the two previous comments re Castillo's apparent misrepresentation of himself as still a NAS member. The organization has been made aware of this. It is a blatant lie, as we all know.
November 30, 2022 at 3:04 PM

Anonymous said…
According to the NAS webpage his membership has not being reinstated.
http://www.nasonline.org/member-directory/members/20047363.html
He is lying and there's proof of it.
November 30, 2022 at 3:08 PM

Michael Balter said…
Castillo is NOT a member of NAS. The Webpage is accurate and current.
November 30, 2022 at 3:10 PM

Anonymous said…
Castillo is grasping at straws: “1 Until shortly before Defendants’ filed their motion, these press releases were available to the public on the NAS website. They are no longer available, and Plaintiff has no knowledge of when they were subsequently removed” How shameless. He basically tells on himself that he insists he was kicked out due to sexual harassment allegations when the NAS never specified which allegations and investigations of his behavior led to his being kicked out. If he is so confident these press releases existed, wouldn’t he have printed or screenshotted them in preparation for his filing? Simple; they never existed.
December 6, 2022 at 1:35 AM