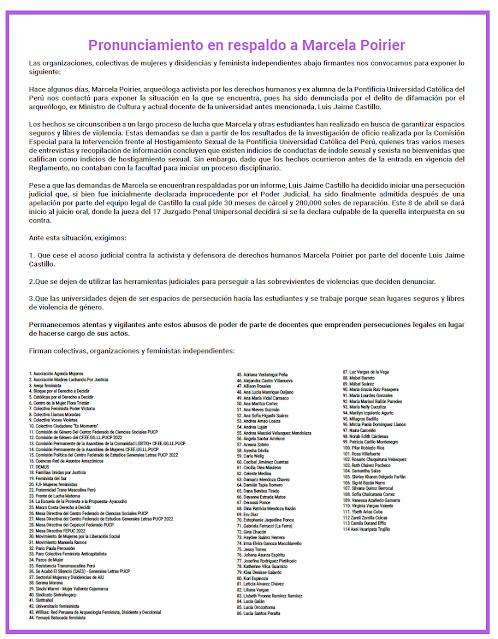 As I reported earlier, Peruvian archaeologist and former culture minister Luis Jaime Castillo Butters has sued Peruvian anthropologist Marcela Poirier for defamation, following her truth-telling about his long history of sexual harassment and bullying, including to the U.S. National Academy of Sciences. After an investigation, the NAS rescinded Castillo's membership, the first time an international member has been kicked out of the Academy.

Earlier, the sexual harassment commission of Castillo's university, the Pontifical Catholic University of Peru, found the allegations to be supported by the evidence. However, the PUCP has taken no action against him, and he is still teaching there; even worse, the university has threatened to suspend students who protested and demanded that it take action.

The hearing in this case will be heard by the court in Lima, in an online session, on April 8. Marcela faces a possible 30 months in jail and and approximately $50,000 in damages, if the court decides to give Castillo what he is demanding. I will be one of the witnesses, testifying to the findings of my reporting on Castillo, which was based on the accounts of numerous survivors.

Fortunately, support for Marcela is building. The above statement in her support was just published, signed by more than 100 organizations, feminist groups, and individuals. (I hope to have an English translation of it available soon and will post it here.)

Meanwhile, the NAS, along with the Institute of Andean Studies--which brings together many of the scholars in Castillo's field of study--have been alerted about this emergency situation, and the IAS is now looking into it. I am awaiting an update from the NAS about what action, if any, it plans to take.

I hope this show of support for Marcela in her own country will trigger the consciences of her colleagues in the United States (Marcela got her PhD at Purdue University) and around the world to the point where they will speak out against this blatant and vicious retaliation against a colleague who simply told the truth about an abuser. I have also written personally to four American anthropologists well known for their #MeToo advocacy (the authors of the groundbreaking "SAFE" study), in hopes that they too will issue a statement of solidarity.

Update April 4: The Institute of Andean Studies, the professional organization closest to Castillo's area of research, issues a strong statement prompted by his lawsuit against Marcela Poirier. This is the way to step up.

Anonymous said…
Finally, Marcela Poirier was sentenced to 1 year and 8 months in suspended prison. The ex-minister psychopath used all his influences in the judiciary to achieve his revenge, because
that's what he did, take revenge. Unfortunately, nobody here supports Marcela, because there is fear of a trial, because this patient has the support of the PUCP's lawyers, he does not pay for these services, that is, the PUCP supports this patient in everything. Unfortunate, because he will spend time and continue attacking more defenseless women. This country is used to supporting patients and observing how they attack female students, it is in the entire university system, because there are women who remain silent because it suits them, as in the case of the mistress that this patient has at the PUCP. My sincere solidarity with Marcela!!
May 24, 2022 at 3:29 PM

Anonymous said…
It seemed from peruvian news sources that the commission and PUCP had been threatened with being sued by Castillo after the investigative report was leaked. Castillo also accused the commission of being a bunch of radical feminists and accused them of being corrupt in news interviews and in his final arguments. If the commission or PUCP were under pressure to issue that second report from July 2021 that was more tepid in affirming evidence for sexual harassment, PUCP should be hauled over the coals for pressuring the commission on behalf of Castillo.
May 25, 2022 at 4:02 PM

Whatever Clancy and Balter’s disagreements and acrimonious fights, Clancy should be explicit to Castillo about not being used in his lawsuit and persecution of Poirier. Why is she letting herself be used like this?
May 26, 2022 at 10:11 AM

Michael Balter said…
Yes, let’s talk about Kate Clancy. She has spent the last five years running a dishonest, falsehood-filled campaign against me and my #MeToo reporting.

1. She instigated an “ethics complaint” against me with my professional organization, the National Association of Science Writers (NASW), while lying under oath that she was the main one behind it.

2. That complaint has now been used in two lawsuits by abusers trying to shut up their victims, Kurin v. Balter and Castillo v. Poirier. In the Castillo trial, his lawyer referred directly to the complaint, while getting the details entirely wrong.

3. Clancy and her fellow SAFE authors refused, despite multiple pleas, to lift a finger to support Marcela Poirier. So much for “#MeToo advocates.”

Clancy once did a lot of good in the #Metoo movement, important research and advocacy. Now she is on to other things. Her work has not led to the exposure and discipline of a single abuser; mine has led to many. Clancy is a sort of BethAnn McLaughlin lite, mainly acting as a Twitter troll. More on this to come.
May 26, 2022 at 11:12 AM

Note that he has lied or misrepresented the fact that the commission’s “evidence of sexual harassment” refers to Poirier’s complaint, which was distinct from the informe that dealt with the accusations of Balter’s reporting. He also keeps changing his story. First the image that Poirier supposedly saw was of a Moche erotic imagery. Then it simply did not exist according to his former students who testified on his behalf. And now it is an ethnographic photo? It saddens me that no matter how many times the alleged abuser lies or misrepresents things, they are always seem as more credible. The commission itself even said he contradicted himself twice, including once by denying that he had been talking about the details of the investigation and the possible complainants to his students during class. It was recorded that he did.

The Stanford case simply did not have firm evidence to back up Poirier’s complaint to the commission. I don’t think she was publicizing this part of her own complaint. Castillo has a record of writing positive rec letters (UCLA case) but then calling people up to say that the person should not have been admitted. He knows how to cover his tracks, unlike Urton.

It is very manipulative and smart of Castillo to seize on one thing (Stanford) and apply it to cases that had nothing to do with Poirier’s complaint to the commission.
June 3, 2022 at 2:44 PM

Anonymous said…
Archaeology PUCP keeps showing support for Castillo. They invited Canziani, who testified under oath in a Peruvian court in the trial against Marcela. Canziani is a long time friend and supporter of Castillo. That’s how the network of power works.

Interesting how NO ARCH PUCP professors signed this. 2 years later, and with everything that has been happening, all of them keep supporting Castillo. What a shame!

Anonymous said…
1. Comunicado PUCP
2. Comunicado profesores y profesoras PUCP (except archy pucp)
3. Comunicado Coordinadora Nacional de Derechos Humanos
At some point the archaeology community at PUCP have to wonder if their support to Castillo all this time was a mistake, and that by doing so they’ve been turning their backs to the real victims.
With your silence in several crucial moments you gave a tangential support to Castillo, even now. Sometimes silence speaks louder tan any words and your silence speaks volumes.
You are just happy and chill enjoying your tenured, stable, well payed positions. Nobody now would believe you are victims of anything, you never were. You keep confirming you are part of his network of enablers.