From the very beginning of the Kurin v. Balter defamation case, the issue of Danielle Kurin's relationship with her former husband, Enmanuel Gomez, has been a major bone of contention. This report is based on follow-up reporting I carried out earlier this year, talking with sources with direct knowledge of the facts.
Kurin has shown a great sensitivity about her relationship with Gomez, whom she married in Santa Barbara in early 2016--months after she learned that a complaint had been filed against Gomez alleging sexual harassment at her 2015 field school in Peru, as documented in the Title IX report issued by the University of California, Santa Barbara. She divorced Gomez with a decree effective December 1, 2019, according to California court records. In her Amended Complaint against me, filed in August 2020, Kurin argues that she was only "briefly" married to Gomez (for three years), and that she separated from him in August 2018 after troubling incidents that took place at her IFR field school the previous month. Kurin also tackled the issue of her relationship with Gomez in her response to a blog post I published in July 2020, where I cited witnesses to the effect that she was still closely associated with Gomez despite her contentions in the Amended Complaint that she had had very little contact with him since they separated--and that contact was, she maintained, only for purposes of processing the divorce.
However, I have learned from sources with direct knowledge that Kurin and Gomez had married earlier, on September 20, 2015, in a religious ceremony in the city of Andahuaylas, where the Gomez family is largely based. According to the sources, the wedding was held at 3 PM that day at the Puma de Piedra restaurant in Andahuaylas, one of the city's fanciest restaurants. The ceremony was officiated by a curate of a local Catholic parish. The attendees at what is described as a very festive occasion included Gomez's family and friends, among others.
This raises the question of whether Kurin, in the eyes of the Peruvian Catholic Church, is still married to Gomez, despite her U.S. divorce from him.
However, one thing seems clear: Kurin is still considered part of the Gomez family. In a Facebook celebration of the birthday of Gomez's father, Diogenes Gomez Orihuela, in March of this year, Kurin (referred to as "Daniela," as the family calls her) is given a place of honor among the children of Gomez's parents. This is indicated in the Facebook posts below.
The Gomez family is known to be very fond of Kurin, and she is also popular in Andahuaylas, in part because she has learned to speak the local language, Quechua. It would appear that in the eyes of her Peruvian in-laws, at least, Kurin is still married to Enmanuel Gomez. 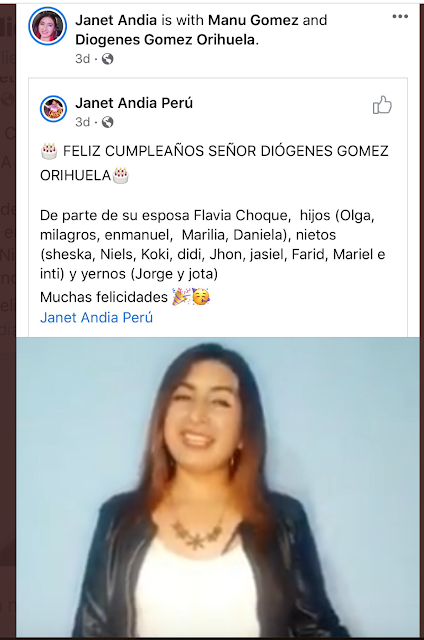 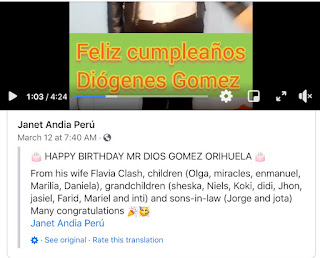 Kurin v. Balter is a "SLAPP" suit, and should be dismissed as an attack on freedom of the press.
My legal team and I continue to argue that this lawsuit is what is known as a "Strategic Lawsuit Against Public Participation" (SLAPP), meaning that the purpose of the litigation is to silence me and my reporting as well as the survivors and witnesses who have given evidence against Kurin. We have argued that under New York's new and improved anti-SLAPP law, which some federal and state judges have already applied retroactively, that the case should be dismissed. Although the judge has not yet allowed us to make such an early motion for summary judgment in the case, we do believe that the law and judicial precedent supports our position.
Litigation is difficult and expensive. Please support the legal defense fund.
Although my attorneys from BakerHostetler are representing me pro bono--and their hard work on behalf of freedom of the press and survivors is much appreciated--I must pay for the basic expenses, such as court reporters, subpoena service, transcription services, and a host of other things. You can help out by donating, as generously as possible, to the GoFundMe legal defense fund. And, if you have already given, or if you are not able to, please spread the word on social media and all your platforms.
Thank you.
Update June 3: Danielle Kurin was asked through her attorney if she would comment on the blog post above. She declined to do so.
Update June 11: This Proof of Marriage between Danielle Kurin and Enmanuel Gomez on September 20, 2015, in Andahuaylas, Peru, was attested to by the parish of San Pedro de Andahuaylas, Roman Catholic Diocese of Abancay, where the marriage was recorded. 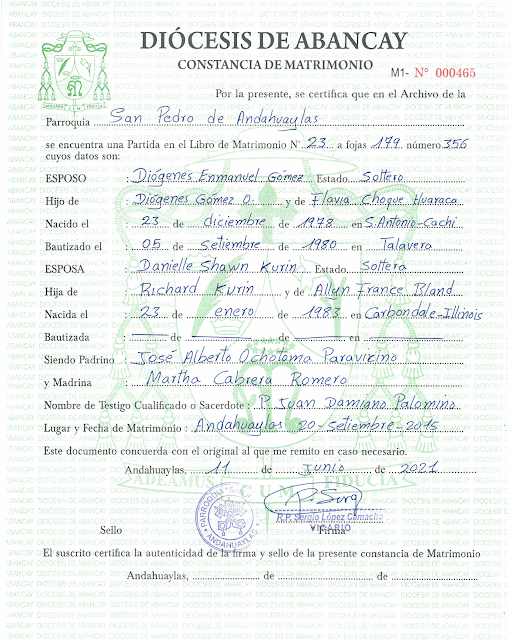 Anonymous said…
According to the UCSB course listings https://my.sa.ucsb.edu/public/curriculum/coursesearch.aspx kurin is teaching osteology in the fall. Did she get tenure?
May 30, 2021 at 12:03 PM

Michael Balter said…
According to the best information I have, the university has made no final decision about her tenure and promotion.
May 30, 2021 at 12:09 PM

Anonymous said…
Seeing Kurin’s name on the fall schedule actually makes me want to vomit, that’s how much of a trauma reaction I have to that psychopath. It’s absolutely unconscionable of UCSB to do this to the community, to the students whom they routinely put in harm’s way by sheltering this abuser.
May 30, 2021 at 5:15 PM

Michael Balter said…
Re the previous comment: I think it’s essential for everyone following this to understand the very great amount of damage that Danielle Kurin has caused to a large number of people. I have tried to convey that in previous blog posts, and I will continue to lay out the details in posts to come. Some of that damage is very long-lasting, this is no joke or just some kind of personal dispute between me and Kurin.
May 30, 2021 at 5:27 PM

Anonymous said…
Yes, it’s disturbing to see the course listed as full. You have to wonder if there will be a new victim among the unwitting young people putting themselves in her ‘care.’ Even online, it’s a risk.
May 30, 2021 at 5:48 PM

Anonymous said…
Puma de Piedra > IS < a very nice restaurant which is often frequented by tourists and government officials who visit Andahuaylas. Couldn’t have been a cheap affair to get married there. Also contracting Janet Andia for that birthday jingle probably cost a decent amount of $$$oles. All even more preposterous considering that Kurin tried to dupe people into thinking that the Gomez family are poor framers who live in a hut, and that she was forced to stay at their place because Andahuaylas was “rural” when in reality there are plenty of nice hotels in town. All goes to show the extent of her credibility and moral integrity.
June 1, 2021 at 3:19 PM

“It’s absolutely unconscionable of UCSB to do this to the community, to the students whom they routinely put in harm’s way by sheltering this abuser”
You said it. According to the schedule of classes she’s actually teaching, right now, two online courses (both full) and another one scheduled for the Fall. By having her interact with students when there’s still such strong doubt as to her fitness to do so, UCSB anthro is making sure to blacklist themselves in the Andean community. No way I am recommending that department anytime soon.

According to UCSB undergrads in this thread, she solicits RateMyProfessor reviews...
June 1, 2021 at 6:19 PM

1. For a short time; fleetingly.
"He worked briefly as a lawyer”

2. A period of three long years, where a lot of horrible things happened. Often used by corrupt archaeologists in an attempt to conceal those horrible things.
“In Kurin v. Balter, the Plaintiff argues she was briefly married to Emanuel Gomez”
“At the UCLA Town Hall meeting, Willeke Wendrich told everyone that Danielle Kurin was briefly a member of the IFR board”

The irony of course is that Dr. Amber Van Derwarker criticized the IFR for not making sure their field instructors are properly trained, while all the while the department is letting abusive professors like Kurin run wild...
June 4, 2021 at 11:38 AM

Anonymous said…
Being as vague as possible, I am an undergrad student of Dr. Kurin. I can confirm that she asks classes to leave comments on Rate My Professor AND she has sent out several emails/chats asking students to fill out the ESCI survery this quarter so that she can keep her job (that's literally what she says, I have the emails to prove it), which seems a creepy and manipulative way to guilt higher survey scores out of students.
June 5, 2021 at 8:28 PM

Michael Balter said…
To the previous commenter, I’d be very interested in seeing those emails if you want to send them to me privately.
June 5, 2021 at 8:31 PM

Anonymous said…
My spidey senses are tingling. There is no way that employability and tenure at any R-I university will be conditional on ESCI evaluations and RMP scores. Half the faculty at UCSB would be out on the street if this was the case. She cannot possibly expect some positive testimonials to magically erase years of students complaining to administration about bullying, formal investigations (plural) into intimidation and quashing sexual harassment grievances about ex-partner, inflated lawsuits against the university, cyberbullying peers, and who knows what other skeletons are lurking in that dark closet.
June 9, 2021 at 10:30 AM

Anonymous said…
She's trying to get documentation that shows she's a Good Nice teacher in support of her baseless lawsuit.
June 10, 2021 at 1:38 PM